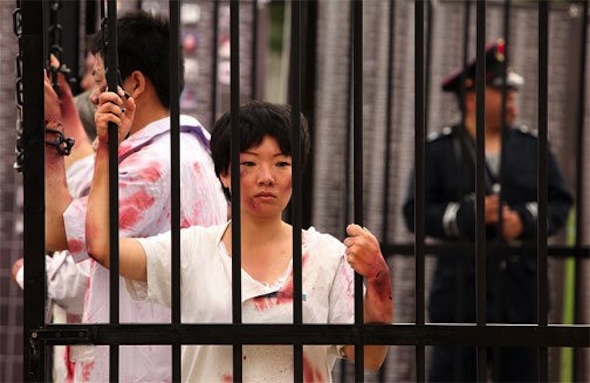 Over at Commentary, Jonathan Tobin notes that the New York Times finally published a story about woman in Oregon finding a note inside some Halloween decorations which told the tale of China’s system of forced labor prisons.

These facilities—formerly called laogai or “reform through labor” but now simply referred to as prisons to avoid negative connotations—have been in use for decades as a means of crushing beliefs unapproved by the country’s authoritarian regime. But given the vast market and huge amounts of money that the Chinese regime has at its disposal, these prisons are not something that Americans and Europeans hear much about.

As noted in the letter, many members of the Falun Gong religion are imprisoned in such camps, which often make cheap consumer products. The story had been in international circulation since December of last year before the Times decided to publish something about it June 11.

The letter, which was unsigned, intersperses Chinese characters alongside English ones. Here is the English message:

“If you occasionally buy this product, please kindly resend this letter to the World Human Right Organization. Thousands people here who are under the persicution of the Chinese Communist Party Government will thank and remember you forever.

“People who work here have to work 15 hours a day without Saturday, Sunday break and any holidays. Otherwise, they will suffer torturement, beat and rude remark. Nearly no payment (10 yuan/1 month). [1.63 USD]

“People who work here, suffer punishment 1-3 years averagely, but without Court Sentence (unlaw punishment). Many of them are Falun Gong practitioners, who are totally innocent people only because they have different believe to CCPG. They often suffer more punishment than others.”

One suspects that the Times would defend its choice not to publish something about the letter on authentication grounds. The paper’s foray into the story was a piece by Andrew Jacobs claiming that he had managed to track down the author of the note.

Still, given how China is the source of so many cheap consumer products as well as the holder of so much American debt, it is hard to argue with Tobin that the laogai prisons are just a little to inconvenient for the West:

“Five days after the Times ran the story about the inmate’s letter, it published a piece about New York University’s decision to push out a prominent Chinese dissident for fear that his continued presence on campus would harm the school’s close financial relationship with Beijing. Just as any hope of abolishing these camps is made impossible by the fact that the Chinese police profit from the suffering of their inmates, so, too, American institutions and businesses are compromised by their financial ties to an evil system.

“Chen Guangcheng had his 15 minutes of fame when then Secretary of State Hillary Clinton persuaded the Chinese government to allow the blind lawyer to leave the country. Chen was a forceful critic of the country’s despotic one-child policies that have involved forced abortions and was given a law fellowship at NYU, but he was recently told to leave and vacate the apartment the university gave him in Greenwich Village. NYU claims it has done nothing wrong and treated Chen with generosity, but the school’s interest in disassociating itself from the dissident’s forceful criticism of China’s Communist rulers is clear. Like many American colleges, NYU is opening a Chinese campus and doesn’t want to pick fights with Beijing. […]

“For all the talk about the lunacy in North Korea and other tyrannical nations, the scale of human rights abuses in the world’s most populous country dwarfs anything happening anywhere else.

“Americans should be ashamed that they don’t know that the cheap stuff they purchase in stores here is paid for in the blood of suffering dissidents and religious believers. Where once mass movements pushed for change in the Soviet Union and even South Africa, people like Chen find themselves stranded in a free country that isn’t interested in what is going on in China. If they lash out in despair at this lamentable situation, who can blame them?”

Could it also simply be that because China’s ruling party calls itself Communist that the same left-wing organizations that were so agitated about South African apartheid or the Abu Ghraib prison abuses simply are not interested in making the regime look bad? If so, it is not entirely the fault of American media since in many cases, human rights reporting is driven by information released by such groups. What will it take for the laogai to finally get the publicity they deserve?

These are all questions that deserve to be asked and answered. The millions of people who have suffered in laogai deserve as much, even if their suffering is inconvenient.

About the Author
Matthew Sheffield is the creator of NewsBusters and president of Dialog New Media, an internet marketing and design firm. Click here to follow Matthew Sheffield on Twitter.