(Minghui.org) Falun Gong practitioners held a candlelight vigil at the Washington Monument as July 20 approaches, as they have every year since the persecution in China was launched in 1999.

This year on July 17, practitioners and supporters sat in peaceful music, held up candles and offered their respect to 69 additional practitioners, who lost their lives as they stood by their choice to adhere to their faith, even in the face of mortal danger.

Ms. Yang Chunling and Ms. Xiang Xiaobo are two of them. 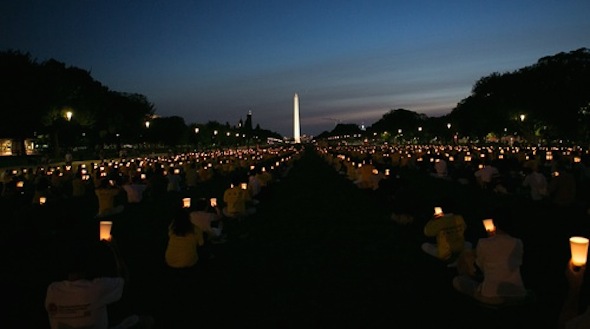 Ms. Yang Chunling, a courageous, petite woman who intercepted a local cable broadcast with Nine Commentaries on Communist Party in 2005, died on April 2, 2014 on her 40th birthday. Ten out of her last 12 years were spent in incarceration.

Her family’s ordeal was unfortunately all too common in China. Her husband wasn’t even informed of her death by the time her body was cremated on April 6. Her elderly father and mother-in-law didn’t know, either. Her mother, also a Falun Gong practitioner, died in October 2004 as a result of abuse suffered during the persecution.

Ms. Yang’s right arm was broken as a result of a beating at the police’s hands on October 13, 2005, when they burst into her home and arrested her.

Ms. Yang’s sister recalled what Chunling had told her about the severe beatings in Liaoning Women’s Prison: “The police handed her over to four very vicious inmates. They held her down on the ground, rode on her, and beat her non-stop. They hit the most sensitive parts of the body for a woman, including the breasts.

“When she rushed out of the door to cry for help, she was dragged back by the four inmates. They wrapped Chunling’s mouth and head up with plastic bags, including her nose, and beat her some more. My sister went from a completely healthy and energetic young woman, to a cripple with two broken limbs.”

Ms. Yang returned home on March 11, 2013, but was still under strict surveillance. Prior to enduring seven years in Liaoning Women’s Prison, she also suffered for three years at the notorious Masanjia Forced Labor Camp.

Many years of torture took a toll on Ms. Yang. He sister described her situation after being released in 2013: “She often skipped meals. During the first week after her release, she refused to take food. She said that the food was poisoned. She often left home late at night, out of fear that she might be taken away for organ harvesting.”

Ms. Yang Chunling passed away a little over a year after her release.

Ms. Xiang Xiaobo was emaciated and suffered a mental collapse before being released on medical parole from Heilongjiang Province Forced Labor Camp on June 5, 2013. It is believed that she was given poisonous drugs during the eight months that she was held there. She passed away on February 20, 2014, at the age of 55.

She was dull-eyed and unresponsive upon her return home. She ate very little and mumbled to herself. She tried to run out of the house or stood or sat in one spot for hours without moving and didn’t sleep. During the last two months of her life, Mr. Xiang was bedridden, curled up in a ball, and consumed barely any food or water.

Sarah Matheson, originally from New Zealand and now living in New York, traveled with her husband and their three-year-old girl to Washington DC to attend the July 20 events on the 17th. She explains why the choice of faith made by the practitioners in China resonates deeply with her:

“I understand why they won’t stop practicing, why they will never stop practicing. I understand because if you have found something you believe that you have been looking for your whole life. And you finally found it. It makes you feel alive and have a purpose. It’s like finding the meaning of life, and then someone asks you to forget about what you learned.”

Charles Holland contributed to this report.