After 15 torturous years in jail, Falun Gong prisoner of conscience is detained again immediately upon release

The Chinese regime meant his arrest and show trial to be body blows to the spiritual practice of Falun Gong. After serving 15 years of his sentence, enduring torture, and suffering a stroke, he was released from prison on Saturday without fanfare or audience, save for the local cops who appeared without warning and whisked him away to a brainwashing center.

Wang Zhiwen was the coordinator of the Falun Dafa Research Association in Beijing when police burst into his apartment in the dawn hours of July 20, 1999, pulled him from his bed, and dragged him off to jail.

Throughout China that night, the Chinese regime’s secret police, the Ministry of Public Security, arrested hundreds whom it had identified as key members of Falun Dafa (also known as Falun Gong).

Those arrests were the first salvoes in the Chinese Communist Party’s (CCP’s) campaign against the meditation discipline. Later that day, the police began rounding up those regarded as rank-and-file members.

Tens of thousands at a time would be crammed into the local sports stadium. They would be held for days in the sweltering July heat without shelter, food, or bathroom facilities, and with little water, while police demanded they sign a statement promising to stop practicing Falun Dafa.

Wang received special treatment. When his trial was broadcast six months later, Wang’s family noted that his once-black hair had turned gray, and his face looked tired and bruised. He had been tortured. His family judged that in those six months of imprisonment he had aged 10 years.

The torture Wang has endured has a purpose. The CCP’s typical procedure is to torture a prisoner of conscience until he breaks and then film him recanting his former beliefs. No such video has ever been produced of Wang.

An engineer for China Railway Materials Commercial Corp. and a Communist Party member, Wang would seem to be one of the last individuals who would appear in the dock at the Beijing Intermediate People’s Court.

His “crime” was that he had served as a volunteer who devoted himself to assisting other Falun Dafa practitioners in Beijing. 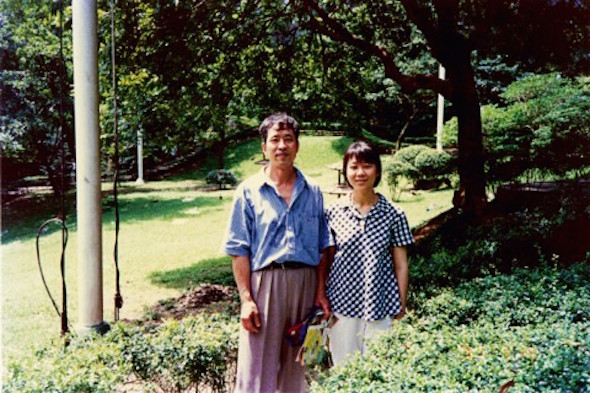 Wang’s daughter Danielle remembers him sometimes working 24 hours a day and skipping lunch and dinner. Whenever a practitioner faced difficulty, Wang would show up to lend a hand.

He was tried on Dec. 26, 1999, with three other CCP members who were advertised as “key” Falun Gong practitioners.

According to Human Rights in China: “The one-day trial took place behind closed doors, without any advance notice and at Christmastime, when the Western media were largely unavailable for it. Moreover, the defendants were reportedly denied outside legal representation, and were each allowed to have only one family member present at the trial.”

While the access to the courtroom was strictly controlled, the trial itself was broadcast all over China. It was meant to send a message.

“The Chinese regime had a fundamental misunderstanding about the Falun Gong community,” said Levi Browde, executive director of the Falun Dafa Information Center. “It believed that there was this leadership and if there were a public display of taking out the leadership, everyone else would follow.”

The regime didn’t understand that each practitioner follows his own conscience, Browde said. There is little hierarchy, and no practitioners who act as leaders in Falun Dafa.

Then-leader of the CCP, Jiang Zemin, set forth his reasons for launching the campaign to “eradicate” Falun Dafa in a letter he circulated to the Politburo on the night of April 25, 1999.

Jiang feared how many people were practicing Falun Gong—official reports placed the number between 70 million and 100 million, more than belonged to the CCP. He also saw the moral teachings of Falun Dafa, which are based on the principles of truthfulness, compassion, and tolerance, as a challenge to the CCP’s ideology.

Wang was sentenced to 16 years in prison. He was initially shipped off to Tuanhe Labor Camp, a place in far northeastern China notorious for abusing its inmates. After a while, he was sent to Beijing’s Qianjin Prison.

Speaking Out
When Wang was sentenced, Danielle was 19 years old. She had moved to the United States in 1998 to complete her education.

CCP officials in China had told Danielle’s relatives that if she raised her father’s case in public, they would punish him.

Her father gave her courage. In a letter she received from him in 2001, Wang wrote, “A noble man is always magnanimous. A villain is always worried.”

Danielle writes in an essay that was aired on National Public Radio, “Dad’s letter showed me he still lives without hate or bitterness because of practicing Falun Gong, so I started to speak out.”

She first seized every opportunity she could in Texas, where she had settled. In 2007, Danielle spoke at a press conference outside the APEC meeting in Sydney. After that, she received no more letters from her father—in total she said she was only allowed to receive three or four.

In 2008, Danielle quit her job as an engineer (she is the third generation of engineers in her family) and moved to Washington, D.C.

There she worked full time for a year, visiting congressional offices, the Department of State, the Human Rights Commission—anyone she thought might be able to have influence in getting her father out of prison.

Brainwashing Center
On Oct. 18, Danielle thought her father would finally be released, after having served almost 15 years of his 16-year sentence.

From conversations with relatives in China, Danielle learned that one of her aunts was allowed into the prison the morning of the Oct. 18 to bring a fresh change of clothes, but then was immediately required to leave.

After her aunt left, the local police and members of the local Citizen Watch Committee went in and then took Wang to a brainwashing center in Beijing in the Changping District.

As far as his family knows, Wang would have been taken by surprise by this transfer. His relatives had been told by officials, but they had no way to warn him.

Officials came to the home of one of Danielle’s aunts and told her that at the brainwashing center, Wang would eat from a buffet and would share a room with only one other inmate. His life, they said, would be easier.

They also said that a month ago Wang had suffered a stroke and been hospitalized. He has high blood pressure and his health is described as “not good.”

While Danielle wanted her father released from Qianjin Prison as soon as possible, she by no means wanted him sent to a brainwashing center.

“There are two brainwashing centers in Changping in Beijing,” Danielle said. “According to Minghui, in both Falun Dafa practitioners have been beaten to death. At these places, nerve-damaging drugs have been injected, destroying practitioners’ health. I am very concerned.”

Minghui is a website run by Falun Dafa practitioners that provides first-person and eyewitness accounts of the persecution they suffer in China.

In September 2009 Minghui reported on the mistreatment Wang was suffering in prison. Four groups of four criminals each were assigned to monitor him around the clock. They would not let him sleep, and if he closed his eyes, they would beat him.

They also forced him to sit on a bench for long periods of time with his feet straight out. If he moved a muscle, he would be beaten. They also jammed toothpicks under his fingernails, causing him to bleed profusely, Minghui said.

In 2007, Danielle received one of her few letters from her father. In it, he focuses mainly on giving his daughter advice about how to live well, as a young woman now making her way in the world.

After eight years of imprisonment that his family said involved frequent torture, Wang wrote his daughter this about his own situation: “The true nature of happiness is joy, tolerance, indifference to fame or gain, pure mindedness, a calm demeanor, and living peacefully, but confidently and free of any restraints. These are the qualities that I strive to achieve. This is the quality of life and noble state of mind I have yearned to establish with a corresponding open mind and happy attitude.”

Wang’s family has been told he will be held only 10 days in the brainwashing center, but they fear whether a stroke victim can last even a day in a place that exists to beat people into giving up belief.