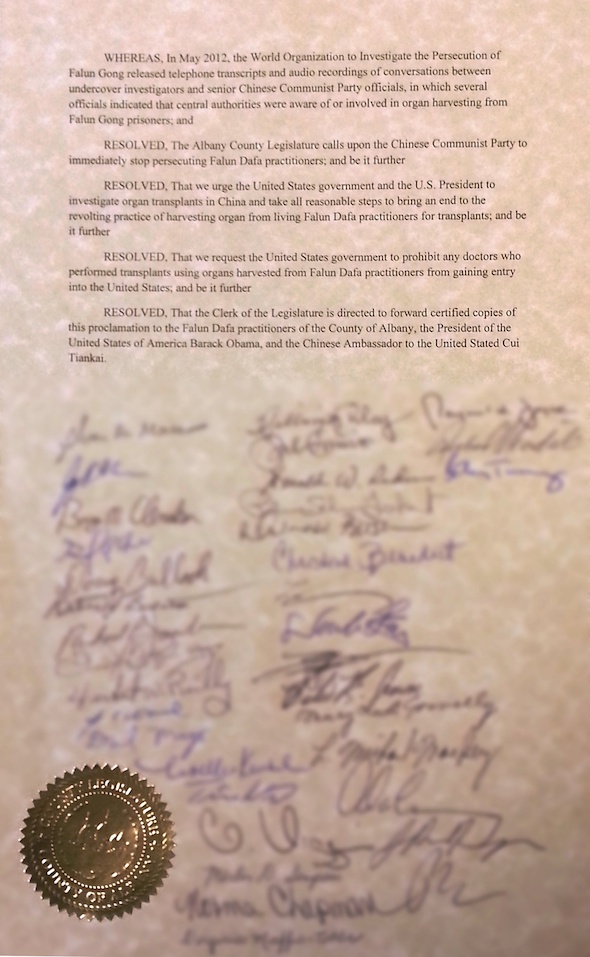 The proclamation states, “Falun Dafa, also known as Falun Gong, is a peaceful spiritual practice with key values of Truthfulness, Compassion, Forbearance for achieving physical and spiritual well-being through exercises and meditation.”

It further commends, “The effectiveness of Falun Dafa in improving health, as well as the principles upon which it is founded, have proven to be immensely popular throughout the world and have attracted people in 114 countries and regions.”

The proclamation also condemns the CCP’s persecution: “Since July 1999, Falun Dafa practitioners have been persecuted by the Chinese Communist Party, as documented by the United States Department of State, the U.S. Commission in International Religious Freedom, Amnesty International, Human Right Watch, and many other governmental and third-party organizations.”

“Over 3,700 Falun Dafa practitioners have died from documented torture.”

The legislators also condemned the CCP’s forced organ harvesting from living Falun Gong practitioners imprisoned under the persecution: “The U.S. Department of State in its 2011 Country Reports on Human Rights Practices stated, ‘Overseas and domestic media and advocacy groups continued to report instances of organ harvesting, particularly from Falun Gong practitioners and Uighurs.”

“The Matas-Kilgour report concluded that the organ harvesting allegations were true and that tens of thousands of Falun Gong practitioners may have been killed for their organs. And

“The harvested organs are then used by the hospitals associated with the prison for transplants, with the customers for these transplants often being individuals from elsewhere, including the United States.”

The legislators “urge the United States government and the U.S. President to investigate organ transplants and take all reasonable steps to bring an end to the revolting practice of harvesting organ from living Falun Gong practitioners for transplants.”

The legislators also “request the United States government to prohibit any doctors who performed transplants using organs harvested from Falun Dafa practitioners from gaining entry into the United States.”