(Minghui.org) Despite the debates on other issues, the Canadian Members of Parliament (MPs) from four major political parties share a firm stance against China’s human rights violations and persecution of Falun Gong.

In the last year, more than 20 MPs from all over the country brought up the Falun Gong issue at the House of Commons debates, condemning the persecution, especially the state-sanctioned organ harvesting from living practitioners in China.

In response to the MPs’ petition, the Minister of Foreign Affairs, John Baird, expressed that “Canada stands up for human rights and takes principled positions on important issues to ensure that freedom, democracy, human rights and the rule of law, values that define this country, are enjoyed around the world.”

He said: “Canada has consistently called on China to respect, protect and promote the freedom of opinion and expression, freedom of assembly and association, and freedom of religion or belief of all Chinese citizens, including Falun Gong practitioners.” 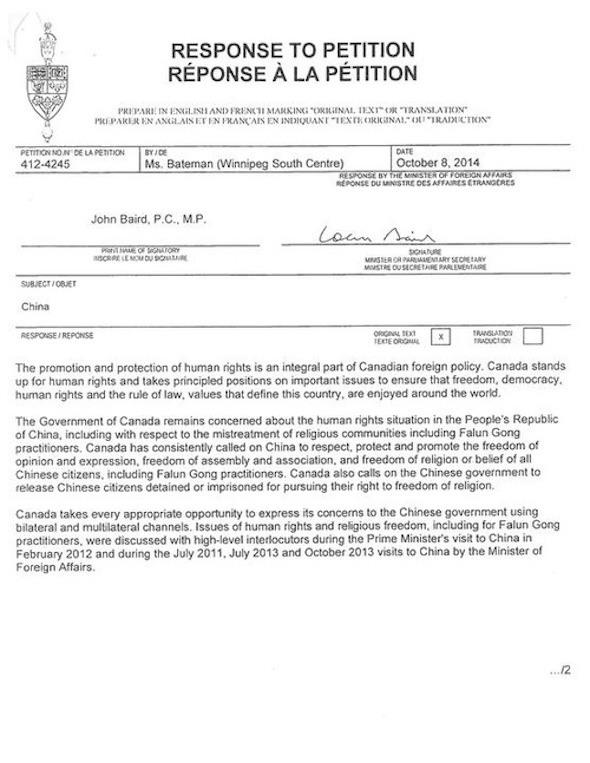 MPs: Calling for an End to the Persecution

Elizabeth May (GP) has spoken for Falun Gong four times at the House meeting this year. On May 1, she presented a petition signed by more than 5000 Canadians from the Toronto area, calling on the government to do everything possible to reach out to China to protect human rights, particularly those of Falun Gong practitioners.

At the House meeting on June 2, Garry Breitkreuz (CPC) presented a similar petition from Canadians who are concerned that the Chinese Communist Party launched an intensive nationwide persecution campaign to eradicate Falun Gong.

He pointed out that hundreds of thousands of Falun Gong practitioners have been detained in forced labour camps, brainwashing centers, and prisons where torture and abuse are routine, and thousands have died as a result.

Libby Davies (NDP) brought up the state-sanctioned organ harvesting in China at the meeting on October 3.

She said: “The petition draws our attention to the fact that Falun Gong practitioners have been the largest and most severely persecuted group in China since 1999 for their spiritual beliefs.”

“The petitioners also point out that Canadian investigators, David Matas and David Kilgour, a former Member of Parliament, have compiled more than 50 pieces of evidence and concluded that the Chinese regime and its agencies have put to death a large number of Falun Gong prisoners of conscience. They also tell us that democratic nations have a responsibility to condemn such atrocities.”

Calling for Action for to Stop Organ Harvesting in China

The MPs have called on the House to condemn China’s involvement in organ harvesting, conduct independent investigations, and pass laws to help stop the crime.

Before the Prime Minister Harper’s visit in China in November, Liberal MP Judy Sgro made a statement at the House of Commons: “Falun Gong practitioners on the Hill are asking him to please raise the issue of forced organ harvesting, especially now that the threat involves 10 family members of Canadians incarcerated there.”

She told the House that organ harvesting from prisoners “has been independently verified several times. One report even cites a price list on a Chinese transplant website offering kidneys for $62,000 and lungs for $170,000.”

Cotler told the House that Canadians are concerned about the cruel practice of forced organ harvesting from Falun Gong practitioners by the Chinese regime.

He said: “The petitioners call upon the government to take measures to stop the Chinese regime’s crime of systematically engaging in forced harvesting of the organs of Falun Gong practitioners, to amend Canadian legislation to combat forced organ harvesting and to publicly call for an end to the persecution of Falun Gong in China.

“Having introduced Bill C-561 to further restrict organ trafficking, I am pleased to stand in solidarity with these petitioners.”

The Response from the Minister of Foreign Affairs

“The promotion and protection of human rights is an integral part of Canadian foreign policy.”

“The Government of Canada remains concerned about the human rights situation in the People’s Republic of China, including with respect to the mistreatment of religious communities including Falun Gong practitioners.”

“Canada takes every appropriate opportunity to express its concerns to the Chinese government using bilateral and multilateral channels. Issues of human rights and religious freedom, including for Falun Gong practitioners, were discussed with high-level interlocutors during the Prime Minister’s visit to China in February 2012 and during the July 2011, July 2013 and October 2013 visits to China by the Minister of Foreign Affairs.”

“In addition, the Prime Minister voiced concerns about the intimidation and repression of Falun Gong practitioners and other religious believers in his public announcement of the establishment of the Office of Religious Freedom in February 2013.”

“Through high-level engagement we continue to encourage and assist China to live up to its international obligations on human rights, including with respect to freedom of opinion and expression, peaceful assembly and association, religion and belief. Canada will continue to raise concerns about the mistreatment of Falun Gong practitioners with the Chinese authorities at the highest levels.”