Investigators into allegations of involuntary organ harvesting from living Falun Gong practitioners estimate that 62,000 were murdered in hospitals across China for their lucrative body parts during the period 2000-2008. The involuntary harvesting of organs continues in China, and investigators believe practitioners remain the main source of organs used for transplant in China.

A shadowy Communist Party organization operating outside the law was created to persecute the tens of millions of Falun Gong practitioners who came from every conceivable background in Chinese society. This organization, named for the date of its establishment, was the 610 Office.

Fifteen years and countless propaganda onslaughts, acts of civil discrimination, beatings, torture, and murders later, the 610 Office’s efforts have seen anything but success. Falun Gong practitioners continue to tell the Chinese people about the persecution and the nature of the communist regime.

A pair of “very urgent” 610 Office reports from April 2013 and leaked to New Tang Dynasty Television (NTD) reflect the concerns of 610 Office staff at their failure to carry out Jiang Zemin’s charge.

Not only have Falun Gong practitioners refused to bend in the face of state persecution, they have vastly expanded their efforts in recent years.

According to Heng He, a commentator on China for NTD and Epoch Times, the language of the documents is typical of Party-speak, and looks very similar to openly published documents concerning Falun Gong. The reports are stamped with seals bearing the official name of the 610 Office and have copy numbers as well as secrecy levels seen in other internal documents.

The 610 Office reports came from a branch in the southwestern Chinese province of Sichuan, as reported by NTD on Nov. 24.

One of them, submitted by an officer called Yu Daming on April 23, 2013, came with the labels “top secret” and “very urgent.” Its contents concerned the words “Falun Gong,” “May 13,” “April 25,” and the activities of practitioners in regard to these dates, which are sensitive terms for the communist authorities.

May 13, 1992, is the date Falun Gong was first introduced to the public in Northeast China.

April 25, 1999, was the date of an impromptu peaceful demonstration in Beijing attended by 10,000 Falun Gong practitioners in front of Zhongnanhai, the CCP leadership’s compound.

The demonstrators were there to protest the illegal detention and beating of practitioners in the city of Tianjin, which is near Beijing. Chinese Premier Zhu Rongji invited several practitioners into the complex and resolved the immediate concerns, but that night Jiang Zemin, then Communist Party general secretary, circulated a letter to the CCP Politburo laying the groundwork for persecuting Falun Gong.

Citing statistics gathered by censorship authorities, the report said that 20 million text messages with Falun Gong materials had been sent between January and April 2013, or 3.7 times the total number detected in 2012.

The report mentions the vice-CEO of a Sichuan communications firm and Falun Gong practitioner who reportedly purchased multiple cellphones, which he then used to send text messages. He also created a blog containing articles about Falun Gong, which received 110,000 hits before termination.

The report also expressed concern about efforts by Falun Gong practitioners to urge Chinese people to abandon the Communist Party by exposing the history and characteristics of the CCP. Between November 2012 and April 2013, the report said 160,000 phone calls of this nature were made from Shandong Province alone. Many of them were directed at CCP officials, including those stationed in other provinces.

The movement to quit the CCP, known in Chinese as Tuidang, arose in 2004 with the publication by Epoch Times of the editorial series Nine Commentaries on the Communist Party, which was later released as a book.

As of this December, the Tuidang site has recorded over 185 million renunciations of the CCP and its affiliated organizations.

Seven Million Calls in Half a Year

The second report by the 610 Office branch concerned the volume of phone calls made by Falun Gong practitioners to China about the persecution and Tuidang.

Issued on April 28, 2013, the report states that following the magnitude-7 earthquake in Lushan on April 20, Chinese officials received calls en masse urging them to withdraw from the CCP. 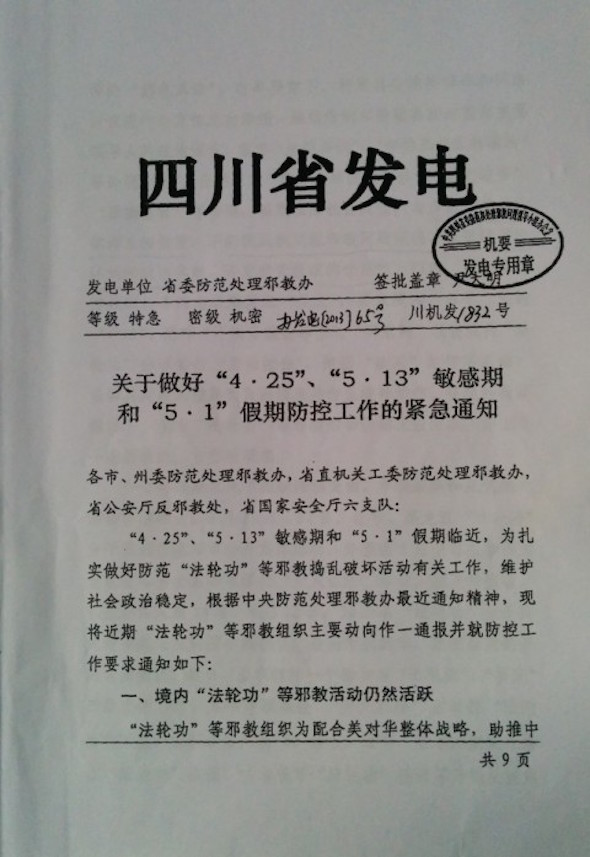 The report revealed that during the six-month period from October 2012 to March 2013 a CCP digital security center intercepted 909,000 phone calls directed at Sichuan from outside the Chinese borders, or an average of 5,000 calls daily. In the same timeframe, 7,272,000 foreign calls were intercepted nationwide, a figure presumably much lower than the total numbers successfully dialed and received.

The Sichuan branch of the 610 Office could not be reached for comment. 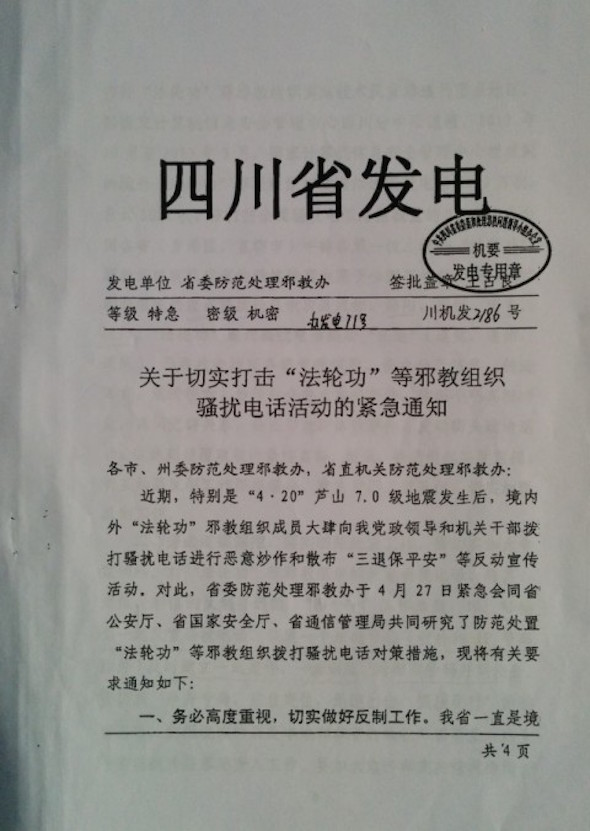 Ever since July 20, 1999, Falun Gong has been consistently persecuted on a scale and with an intensity not seen since the Cultural Revolution (1966–1976), in which millions of people were killed or driven to suicide for supposedly unorthodox political views.

Practitioners suffer expulsion from the workplace and their children are denied education. According to the Falun Dafa Information Center, millions of practitioners have been or are currently held in labor camps and other areas of detention. The imprisoned are subjected to brainwashing and various tortures including electric shock, injection of dangerous drugs, and starvation. Female practitioners suffer rape and forced abortions.

The Information Center has documented over 3,800 deaths from torture and abuse, but, because of the difficulty of getting information out of China, this figure is believed to be only a fraction of the true number.

Investigators into allegations of involuntary organ harvesting from living Falun Gong practitioners estimate that 62,000 were murdered in hospitals across China for their lucrative body parts during the period 2000-2008. The involuntary harvesting of organs continues in China, and investigators believe practitioners remain the main source of organs used for transplant in China.

Though Jiang Zemin stepped down from his official leadership positions in 2002 and 2003, he left behind an extensive web of henchmen and cronies, many of whom earned their rank thanks to the enthusiasm they demonstrated for persecuting Falun Gong.

This political faction, tied together by their common crimes and benefactor, has struggled to maintain influence in the CCP. With the rise of Xi Jinping, a politician with little role in repressing Falun Gong, as the regime’s new head, Jiang’s underlings have found themselves subjected to a new round of investigations and purges. Through the extrajudicial process of shuanggui, Party members themselves may be detained indefinitely. Some are even tortured to extract confessions.

The regime has not indicated it is preparing to end the persecution, though a number of the officials who were involved in it have been taken down in corruption investigations. These include former security czar Zhou Yongkang, and head of the 610 Office Li Dongsheng.

Tens of thousands of officials, a large but unknown number of whom have taken roles of varying degrees in persecuting Falun Gong, have met similar fates. Individuals in the 610 Office and other organs responsible for the persecution may feel time is running out.