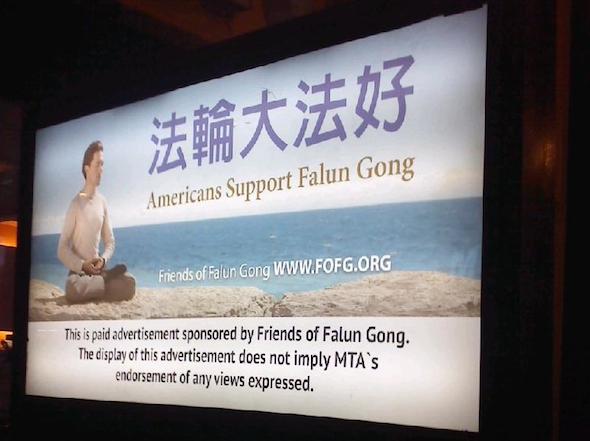 By Friends of Falun Gong

One of Friends of Falun Gong’s activities is providing materials to raise public awareness about the Chinese Communist Party’s persecution of Falun Gong in China, and this includes billboards.  The above billboard is a special one in our hearts because it is in the center of an Asian section of Flushing, New York.

In 2008, many Falun Gong practitioners were attacked on the streets of Flushing by mobs supporting China’s Communist regime. In fact, the then head of China’s consulate in New York, Peng Keyu, had encouraged the violence.

Why would the Chinese Communist Party ‘s (CCP) malevolence be so focused on Flushing, New York? Flushing is the home of the Global Service Center for Quitting the Chinese Communist Party, a volunteer organization that helps Chinese people to renounce the CCP and its various affiliated youth leagues. This movement, called Tuidang, does not seek any power. Tuidang simply gives people the opportunity in their hearts and minds to separate themselves from the murderous CCP.

In 2008, many Falun Gong practitioners traveled to Flushing for weeks to peacefully bring attention to the violence. With the support of the New York City Police, the practitioners outlasted the mobs, which faded away. However, there still have been numerous incidents of harassment in Flushing over the years.

At the time of the 2008 attacks, the Tuidang movement had helped 36 million Chinese people worldwide to quit the CCP.  The number is now approaching 200 million.

For information about the 2008 attacks, you can read the following articles by Joshua Philipp of the Epoch Times:

For information on more recent incidents: