(Minghui.org) When he was a boy in Poland, Mateusz believed in the existence of a wonderful realm, transcending all the pain and suffering of the world. He looked for the spiritual power that would lead him to that place, without success. Eventually, Mateusz became a hoodlum on the streets, addicted to alcohol and drugs, until a book permanently altered his life’s trajectory. Now, this young man is happy, healthy, and has a good job. What happened? 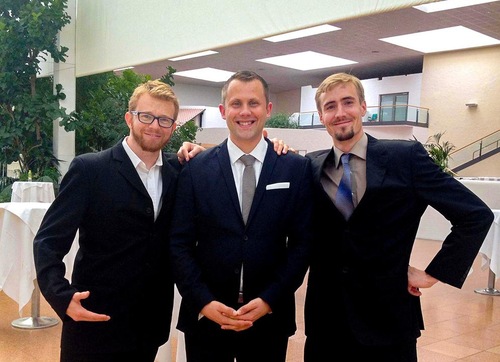 Mateusz was always a big fan of sports, good at running and martial arts, especially Muay Thai. He grew up with his younger brother and father in a neighborhood where one’s dignity is defined and protected by one’s fists. His father told him to always get revenge when insulted. In Mateusz’s mind, fighting was not for fun, but to protect himself or the weak. He rarely missed a brawl on his street.

Mateusz hated the smell of cigarettes and alcohol, but was surrounded by them – in his house and throughout the neighborhood – as almost everyone in the community used them for releasing stress. Gradually, he became addicted to them too, although deep in his heart, he still hated them.

Looking for Another World

Underneath the surface of his often violent life, nonetheless, Mateusz was on a spiritual quest. He read a lot of books on metaphysics, including books on oriental meditation and martial arts. At the same time, he also took hallucinogenic drugs.

“I was sure that beyond this world, which is full of pain, unfairness, prejudice, and illusions, there is a real and wonderful world,” he said.

But those books didn’t answer his questions. He pondered: What is the meaning of life? Why do human beings live on this planet? Do lives on other planets also suffer pain and injustice? What is the purpose of meditation and cultivation? Why are the bad people in power? What is the Dharma-ending period described in the scriptures, and what are the causes of the Dharma ending?

Mateusz tried his best to find the answers, the pursuit of which became the most important thing in his life. He kept a diary of his dreams, his experiences in meditation, experiences of his soul leaving his body, and his feelings after experimenting with all kinds of drugs.

Mateusz also searched for books on cultivation on the Internet. One day, on an online bookstore, he saw a blue-covered book among hundreds of books, which drew his immediate attention. One of the reviews said: “This book can fundamentally change one’s mind, and help people to quit all kinds of addictions. It can change one’s body from deep inside, and uplift the cultivators to the realm of consummation.”

“Isn’t this what I have been looking for?” thought Mateusz, and ordered the book right away. This book was Zhuan Falun.

However, he gave up after reading the preface, Lunyu—“I don’t deserve this book,” he thought, “because my body is too polluted, full of alcohol and drugs.”

From Now On, I Will Cultivate

Mateusz kept trying all kinds of things in his quest to explore the spiritual world. He experienced some supernormal phenomena, and was eager to make contact with lives at higher levels who might give him guidance in this chaotic world. Meanwhile, he took more and more hallucinogenic drugs. The doses kept increasing, causing his family and friends to worry about him. He felt lonely, because nobody understood him.

One night, Mateusz took 10 times the usual dose of drugs. “I woke up at midnight, and started to cry out in desperation. I was so sad and I didn’t want to live in this world anymore.”

The copy of Zhuan Falun was sitting there on the bookshelf, seemingly covered with a gentle and warm halo. “All of sudden, I felt surrounded by immense compassion, a compassion that can melt steel. Hope rose in my heart,” Mateusz recalled. “At that moment, my whole life flashed through my mind, scene by scene. I realized that cultivating Falun Dafa is the true purpose of my life, and that it was what I had been waiting for. I cried loudly, and yelled, ‘I refuse to keep sleeping. I want to cultivate! I want to go back home.’”

That night, Mateusz clearly saw the filthy elements in his body and mind, as well as the deviated notions, which were the obstacles hindering him reading Zhuan Falun.

“I recognized my bad behaviors – the drinking, smoking, and using drugs. I knew that if I wanted to cultivate, I had to get rid of them. From deep my heart, I had a wish: ‘From now on, I will cultivate, and go back to my true self.’

“I believed that Master Li Hongzhi (the founder of Falun Gong) would purify my body, and cleanse me of all the foul things in me, as long as I cultivated seriously. I knew what to do—I must read this book right now, and learn how to cultivate.”

The next day, Mateusz announced to his family, “I will change. I will quit drugs, and be a good son.” He was 19.

Mateusz experienced great changes as soon as he started to practice Falun Gong. First, he seemed to have a heavy cold. The symptoms included dizziness, blurred vision, low appetite and aching bones. However, Mateusz remained calm, for he understood, “It is a great thing. It shows that Master Li is taking care of me, and purifying my body. It is a necessary step for real cultivation.”

Over the next eight days, he was nearly comatose. He barely had enough strength to crawl to bathroom and back to bed.

But miracles happened in those eight days.

“In my dream, my body was hanging up in the air, connected to a complex machine with hundreds of wires. The wires were plugged into every organ and acupuncture point in my body, and the ‘machine’ rebuilt my body from deep inside. It cleaned out the dirty elements, installed new components, and recharged my body with new energy.

“I saw a dozen Falun (Law wheels) rotating in my body and rebuilding every part of my body, from deep inside to outside. I saw that my body was like a universe with immense systems in it. Everything was magnificent and magical.”

Every day, Mateusz felt that gigantic amounts of dirty karma and bad notions were taken away from him, and his body became lighter and lighter. “I cried like a baby, and shouted in my heart: ‘I will cultivate! I will cultivate!’” He felt strong compassionate energy current flowing through his body, purifying it, and bringing in wisdom. “I felt that I became wiser, and from the inside to the outside, I felt clean and pure.”

Becoming a Good Person and Living a Normal Life

Mateusz read Zhuan Falun again and again. “This book teaches people how to be a good person, and an even better person. It teaches a cultivator how to improve him or herself to a higher level in everyday life without becoming a monk or a nun, and eventually guides one to become a great enlightened being.”

He joined a local exercise site in Poland, and learned from fellow practitioners’ experiences about incorporating Falun Gong’s teaching of Truthfulness-Compassion-Forbearance in his daily life.

Mateusz moved out of his parents’ house in Gliwice, and moved to Warsaw. “I wanted to be responsible for my own life, and not be a burden on my parents.” He taught himself English, and became a customs worker at an airport. “In my work I encounter all kinds of people. I am happy to help them, and treat everyone kindly,” said Mateusz.

Cultivating Falun Gong completely changed the way Mateusz handles conflicts. He shared, “All the conflicts are opportunities for us to pay back our karma and improve ourselves. For example, a few days ago, my supervisor was mad at me for no reason. She yelled at me in anger. At that moment, I reminded myself to keep calm. I said to her, peacefully and with a smile, that I understood her. She changed her attitude immediately, and was no longer angry. I believe that I just paid back some debts I owed her from my previous life.

“Falun Gong teaches me to be a truly good person, and an even better person. It gives me the criteria to measure everything with. I hope that I will become more compassionate and more peaceful through cultivation. I can sense the power of compassion throughout my eight years of cultivation, and I will strive to do even better.”