(Minghui.org) Olga, a TV producer, was looking for direction in life for many years, “I always felt I was lost like a child. I did not know where I belonged when I was young. My parents treated me strangely. I didn’t feel like I belonged there. I liked traveling and meeting new people. I attempted to find my out where I truly belonged in life while traveling.”

Olga was born in Paris, France, and lived in London for over 30 years. She has lived in Spain for the last two years. Before that, she traveled the world for years looking for meaning in life. She returned home when she realized no need to seek further. 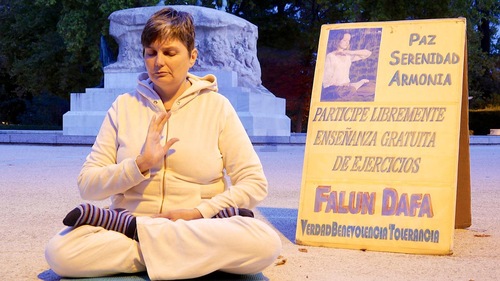 Looking for Meaning in Life

Olga met up with an old friend at a grocery store in late 1998. When the friend heard that Olga was treating illnesses for others with methods she learned in India, the friend gave her an address and time to meet with a group of people who were also treating illnesses. Olga looked forward to meeting some like-minded people.

But when she arrived at the place her friend had told her about, Olga saw a group of people doing exercises with slow hand gestures. She realized, “They are not treating people’s illnesses. I have come to the wrong place. But let me try since I have come.” So she stayed and learned the Falun Dafa exercises. She wasn’t sure what to think, but she sensed a strong energy from the exercises.

Out of curiosity, she came back to practice again one week later. The pain she had been experiencing in her feet was gone. She got a book titled Falun Gong. Reading it, she learned answers to questions that had long perplexed her.

“I had some special experiences. For example, my third eye was open. I could see other dimensions. But I could not understand what I saw. And there was nobody I could share the experience with. I knew that supernatural phenomena existed, but few people talked about them.

“In the book Falun Gong, I found explanations in a few simple sentences. It was very rational and reasonable. I decided to continue practicing Falun Gong.”

But the book clearly mentions that practitioners cannot treat illness for others. Olga enjoyed helping others by curing their illnesses. She found this principle difficult to accept, but wished to learn more. She went to Manchester with a few other Falun Dafa practitioners and watched Master Li’s series of video lectures. They also read the book Zhuan Falun and practiced the exercises together.

“I saw golden rays emit from the video,” recalled Olga, “The rays surrounded my whole body. I was so comfortable, as if I was bathing in the rays. I was astonished.” She continued watching the video and found what Master Li said to be quite reasonable. She gained trust in Master Li and decided to continue practicing Falun Gong. It was at this time that she let go of her attachment to treating illness for others.

Olga felt that she had finally found where she belongs, “I truly felt that I had found my destiny after starting to practice Falun Gong. I felt like a tree that had taken root, taken root in the cosmos.”

For Olga, dealing well with her parents had always been a big challenge, “My mother has a strong personality. She thinks she is always right and tries to control others. For example, she criticized me and told me not do this or that. I was hurt deep down inside. I did not know how to deal with her. I felt I lived in a prison when living at home. I was restricted beyond my tolerance. I sought chances to leave.”

But she learned from Falun Dafa, “I should look inward. This is the first thing I learned. The solution for the problem lies within me. Don’t seek external reasons or point fingers at others when facing conflicts. But calm down and look inward unconditionally.” She stopped arguing with her mother.

In time, she noticed that her mother did not seem to behave as strongly as before. She said she treated her mother as she would treat a child, and offered her the love that any would need. She took care of her mother without any complaints. She could then feel her mother accept her and that their misunderstandings had melted away.

Everyone Should Be Concerned About the Persecution of Falun Gong

The persecution of Falun Gong started in China six months later after Olga decided to practice Falun Gong. She could not understand initially as the reports in the media were distorted and few. Later, she learned from Master Li’s teachings that the persecution was not limited to China. Everyone is affected and needs to make a decision.

To raise awareness and to help stop the persecution, she has done many things, including distributing Falun Gong flyers on Leicester Square in London. She recalled, “I remember at first that I stood there with flyers in hand like a statue. I wished others would walk up to me and take flyers from my hands. I felt embarrassed as I thought others could view me crazy. But I knew I should do that to help the practitioners being persecuted in China.” Now she is happy to distribute flyers to raise awareness about the persecution.

As a TV producer, she wants to make a film to expose the persecution of Falun Gong and the organ harvesting atrocities in China.

“I wish to make a record of the persecution for future generations,” said Olga, “And to let those who do not know the facts learn about what is happening in China. For those who wish to get organ transplants in China, I hope they have a chance to learn about the atrocities taking place. They need to know their organ transplant in China could come at the cost of the life of another. It is important for them to make an informed decision.”