It was drizzling in Manchester when David Bowie arrived on the 17th of November. The arrival of Bowie and his band signalled the start of his UK tour, with the first performance on the evening of the 17th. Disregarding any fatigue from travel, Bowie’s drummer, Sterling Campbell, rushed to the Chinese Consulate in Manchester before joining the rest of the band for the concert. As well as being David Bowie’s drummer for the past five years, Sterling Campbell is a Falun Gong practitioner, who believes in “Truthfulness, Compassion and Forbearance.” Whenever Sterling has visited other countries, he has always tried to participate in peaceful appeals in front of Chinese embassies on behalf of Falun Gong practitioners that have been persecuted to death in China. 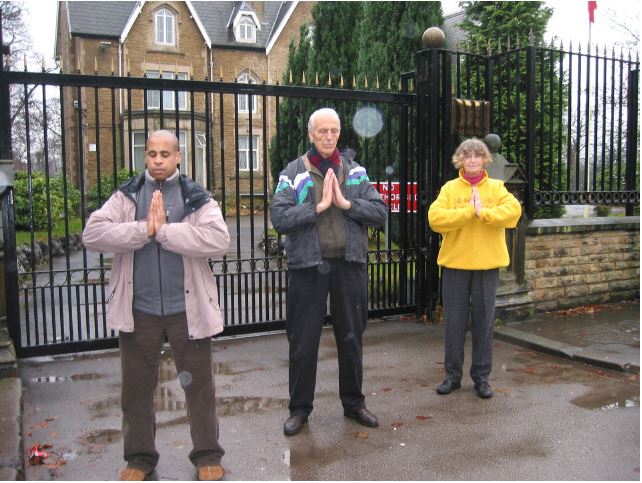 Since Sterling came back from China, his music tour has had an additional activity. With his own experience, he wants to tell all his audience and the friends in the places he visits around the world about the inhuman persecution of Falun Gong in China, and urge people to pay more attention to it and give more support to Falun Gong.About a year ago, Sterling went to China with other western practitioners to appeal for Falun Gong. All of them had a single wish: To urge the Chinese government to immediately stop the persecution of Falun Gong practitioners and to release all imprisoned practitioners. During this time in China, Sterling was beaten by policemen, and also saw a young Chinese girl being dragged on the ground and thrown into a police car after she was pushed over and beaten by policemen.

Terence is a seventy-one-year-old English Dafa practitioner who is lives in Manchester. He was previously sick for several years and was confined to bed until he began practising Falun Gong. Now he is a very healthy and active elderly man who often spreads the beauty of Falun Dafa and expose the Jiang regime’s persecution to people. At the moment, he goes to the Chinese consulate in Manchester every weekday morning with display boards to clarify the facts about the persecution of Falun Gong to passersby and people who go to the Chinese consulate.

After a peaceful appeal in front of the Chinese consulate and a press conference, Sterling went to play in the Bowie concert that evening. Only two organisations were invited to the event, Friends of Falun Gong and Amnesty International. They set up exhibition booths in the hall where the concert was held. Before the concert, many people passed by the booths and took the opportunity to look at the Falun Gong photos and posters. Some of the audience signed their names to a petition book to rescue practitioners and some took flyers. Upon learning about the persecution of Falun Gong in China and Sterling Campbell’s experience in Beijing, people were shocked. Many said that the persecution would not last long, and wished practitioners good luck.