(Minghui.org) It was a warm and breezy August morning when we interviewed Dan Skorbach on the banks of Lake Ontario.

When we found Dan, he was meditating on a big rock. The vast body of blue water became one with the clouds on the far horizon and waves gently lapped against the rocks. We couldn’t help but be mesmerized by such beauty and serenity. 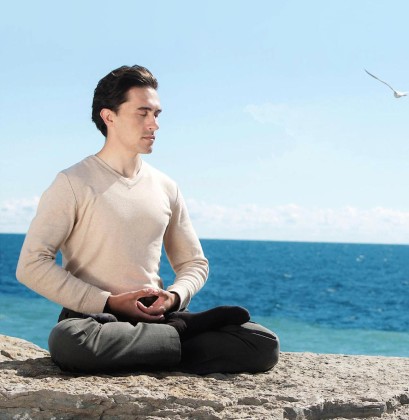 A graphic designer at a global media company and a resident of Toronto, Dan has been practicing Falun Dafa (also known as Falun Gong) for five years. We were curious to find out how a young person who had just graduated from university a year ago became interested in this practice and what major benefits he gained from it.

Dan told us that Falun Dafa enabled him to understand the true meaning of life and brought him a kind of happiness and tranquility he had never experienced before. He no longer felt lost in the material world full of temptations and was grateful that Falun Dafa had changed him from an impetuous person into a level-headed one. While many people his age got carried away by the hustle and bustle of life, he had no trouble staying true to himself and focusing on his priorities.

As a matter of fact, Dan felt his ability to remain calm had made him a better, stronger, and more intelligent person. Not only was he able to enter tranquility in meditation, but he was also able to maintain a peaceful mind in everyday life, be it at home or at work.

Dan was still a freshman at the University of Waterloo when he first encountered Falun Dafa on a Club Day put on by the student union.

He remembered the student union building lobby was filled with loud pop music and dazzling displays set up by different student clubs on that fateful day. Amidst all the noise, laughter, and chitchatting, however, a man in yellow T-shirt sat in meditation undisturbed, as if he were in a different world.

Having always wanted to find something to keep him level-headed and calm, Dan was immediately drawn to the serenity emitted by the meditating man. Another Falun Dafa practitioner noted his interest and handed him a flyer about the practice. The practitioner also emphasized that all instructional materials were free to download online.

Dan couldn’t wait another day, and he tried the Falun Dafa exercises that night following the online videos. To his great delight, he fell asleep shortly after his head hit the pillow at bedtime. He had been suffering from insomnia for quite some time.

Not long afterwards, Dan joined a group of local practitioners for daily exercises at a park. He still remembered the very first time he was able to sit in meditation for a full hour.

He described to us how he endured it. When he felt great pain in his legs, he reminded himself it was to repay his karma and he kept reciting, “When it is difficult to endure, try to endure it. When it looks impossible and is said to be impossible, give it a try and see if it is possible.” (Zhuan Falun) After one episode of such intermittent pain disappeared, he felt very comfortable and gained a deeper appreciation of Master’s teachings: “After passing the shady willow trees, there will be bright flowers and another village ahead.” (Zhuan Falun)

When the next wave of pain hit him, he just told himself to hold on till the very end. His perseverance paid off. When the exercise music stopped at the one-hour mark, his legs were still crossed. He was so excited that he did a somersault right there on the grass. He felt proud of his achievement and knew that anything was possible as long as he never gave up.

Through systematic study of the Falun Dafa books, Dan came to see that the meaning of life was to return to one’s true origin by constantly improving one’s character. As time went by, his mind became clearer and clearer and his heart more and more peaceful. In addition, he felt his wisdom was unlocked to a greater potential.

Keeping in mind that “Zhen-Shan-Ren is the Sole Criterion to Discern Good and Bad People” (Zhuan Falun), Dan always reminded himself to calm down whenever he became emotional, worried, or mad. As he made progress in his cultivation, he was happy to note that it took him less and less time to calm down when faced with conflicts.

Dan used to be a rebellious son, but after he became a practitioner, he worked hard to look at things from the viewpoint of his father. Little by little, he and his father reconciled and began to enjoy a good relationship. He got along really well with his other family members, classmates, and friends.

Inspired by Dan, his young sister also became a practitioner and Dan couldn’t be happier.

A Calm Mind Leads to Finding His Passion in Graphic Design

A math major, Dan always enjoyed the subject, but got frustrated when he realized he didn’t know how to make the world a better place with his knowledge of math. He wasn’t sure if he should still pursue math as a career.

While he was at a crossroads trying to choose a career, a New York-based global media company offered him a one-month internship, which became a turning point for him.

The internship required Dan to do graphic design for different advertisement and marketing projects. At first glance they had nothing to do with his math knowledge, but Dan was not deterred, because he knew as a Dafa practitioner, he should put his best efforts into everything he did. With a calm mind, he worked hard to develop his graphic design skills.

From single-page advertisements to larger-scale projects, Dan became more and more interested in graphic design and wondered if he should pick it up as a career path. But what about all the math he had learned in university?

As he did more and more research in graphic design and other forms of art, he was delighted to see the connection between math and art.

Dan discovered that many great painters and artists in the Renaissance era were actually mathematicians who incorporated math concepts into their artwork all the time. For instance, they used geometry to help them position whatever objects they intended to draw or paint on canvas or paper. As such, the sketches or paintings were in perfect mathematical proportion and appealed to the eye.

Dan also realized that nature was the best mathematician, as everything in nature, from seashells and trees to constellations, has perfect patterns and proportions. Artists in ancient times had long been in awe of nature’s harmony and beauty, so they tried to take cues from nature when creating their masterpieces. Unfortunately, modern art has deviated from tradition and lost its essence–harmony in nature.

Having come to the above realization, Dan no longer had doubts about his math major and knew he’d still utilize his math knowledge, but in a different way. He became a full-time graphic designer at the same company after graduating.

One day Dan suddenly felt bored with his assignment and wanted to do something more interesting. He soon realized, however, that he was being selfish, and he reminded himself of the following passage from Master’s teachings:

“I also want to tell you that your nature in the past was actually based on egotism and selfishness. From now on, whatever you do, you should consider others first, so as to attain the righteous Enlightenment of selflessness and altruism.”

He no longer complained about his assignment and calmed down to focus on the job at hand.

It was Dan’s experience that when he was able to maintain a pure and peaceful heart, he was often amazed at how good a product he turned out. He found that a calm mind often brought inspiration to whatever he set out to do. No wonder his graphic design skills were getting better and better.

To Dan, Dafa cultivation is a way to improve himself as a person and to return to his original nature. He knows that as long as he keeps cultivating, there is always a higher realm he can achieve. After all, “’The Buddha Fa’ is most profound…” (Zhuan Falun), and he intends to continue on this path of Dafa cultivation.